"An arrow can only be shot by pulling it backward. So when life is dragging you back with difficulties, it means that it's going to launch you into something great."

Lung meridian: How Yin Yoga Can Help Overcome Your Sadness

This is the fourth article of the 5-part series on how to harmonize our body & mind through yin yoga and Chinese meridians. So far, we have discussed the Liver, Spleen, and Heart meridians. This article we’ll cover the Lung meridian.

Have you ever felt like crying for no reasons at all?

It's as if the world is painted in different shades of grey and nothing is worthy of a glint of happiness. Well, in western medicine, you'd be labelled with depression and would go home with antidepressant pills. Interestingly, in Chinese medicine, sadness and grief are associated with the Lung meridian. Rather than oral treatment, there are many ways to remove sadness including acupressure, yin yoga & herbal tonics.

Read on to see how yin yoga can stop your uncontrollable crying episodes.

21 Day Yin Yoga To Connect Within

Need a space to reconnect? Join this free program for daily Soulful Yin Yoga, Qi Gong, yoga nidra and meditation classes to help you deepen the understanding of yourself and connect back to your truest self.

The Lungs are solid Yin organs that correspond to the Metal Element. Their associated Yang organ is the Large Intestine. In general, the Lung meridian controls the cycle of Qi circulation in the body. In TCM, Lung Qi deficiency can manifest as fatigue, weak cough, weak voice, lack of desire to speak, shortness of breath, weak respiration, and asthma. 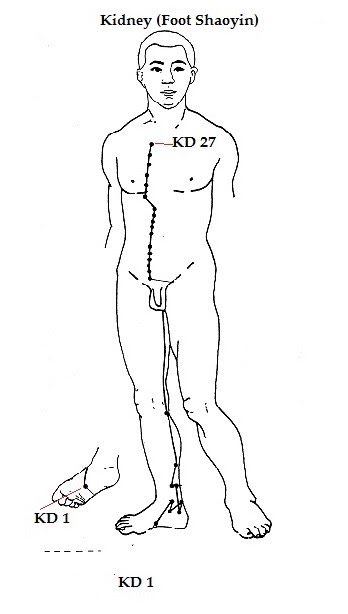 The Lung meridian begins in the solar plexus and descends to meet the Large Intestine. From there, it winds up past the stomach, crosses the diaphragm, splits into two branches, and enters the Lungs. The two branches re-unite and pass up the middle of the windpipe to the throat surfacing near the front of the shoulder. From here it passes over the shoulder and down the front of the arm and finishes at the thumb.

According to the Daoist view, the Lungs represent the congenital virtues of righteousness, dignity, generosity, and social responsibility. After birth, the lungs store the acquired postnatal emotions of grief, sorrow, sadness, shame, disappointment, self-pity, guilt, and despair. If the circulation of Qi becomes obstructed for long periods of time, Lung Qi stagnation can initiate chronic emotional turmoil, such as sudden outbursts of crying or sinking into despair. You can restore and grow your positive attributes such as integrity and high self-esteem when you harmonize the Lung Qi.

Yin Poses for the Lung meridian:

Just like the Heart meridian, the yin yoga poses for the Lung/Large Intestine meridians are those that target the upper body, specifically the inner arms. I recommend continuing on the poses described in the Heart meridian article, including the Reclining Twist, Camel, and Broken Wings. Hold these poses for a minimum of 3 minutes and up to 5 minutes. Rest after each pose and alternate side.

Here are two additional poses that stimulate the inside of the arms which will active Qi flow along the Lung meridian:

How to get into the pose:

Caution practicing this pose if you have sensitive shoulders or you’re prone to shoulder dislocation. If this is the case, I recommend lessening the intensity by threading one arm only or skipping this pose entirely!

Getting into the pose:

Start by coming on to your hands and knees. Slowly extend your arms out until your head or chest touches the floor. It's alright if the hips come in front of the knees or towards the heels. If you find the pose too intense, lean towards the heels more (almost like a glorified Child's pose).

Don't forget to share this article with your loved ones who is going through hard times. Your act of kindness may just be the thing they need right now.

Creator of Soulful Yin Yoga Method, Annie has been certifying yoga teachers since 2013. Through her own healing journey, Annie has become an expert in the emotional side of yin yoga and Chinese meridians. She calls for a heart to heart approach in her yin yoga classes through storytelling and genuine self-reflections.